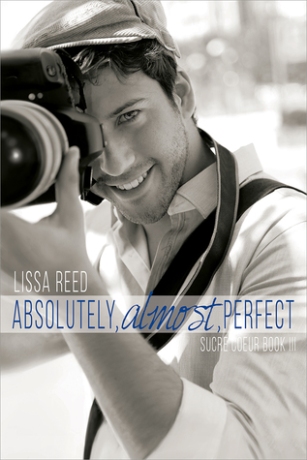 Craig Oliver and Alex Scheff lead a charmed life. Craig is part owner of Sucre Coeur, the bakery he’s loved and managed for years. Alex is an up-and-coming Seattle photographer. Their relationship has been going strong for a year, and everything is absolutely perfect—right up until Craig receives a wedding invitation from his long-estranged brother.

As Craig grows tense over seeing his brother for the first time in years, Alex can’t control his anxiety over meeting Craig’s family. At the wedding in an English hamlet, boisterous Scottish mothers, smirking teenage sisters, and awkward ex-boyfriends complicate the sweet life they lead.

I had so much fun reading this book and I think other readers and fans of the series will enjoy having the series come to a close where it all started with Alex and Craig. Their final chapter was funny, light-hearted, emotional, touching and filled with so much character development! I loved it all. When reviewing the final book in a series, I am always worried that I might give too much away, so I’m gonna try to stick to the characters highlights as much as possible.

In Absolutely, Almost, Perfect, Alex faces his anxiety and Craig is forced to face his past and family during their trip to England for his brother’s wedding. It was funny the way that both Craig and Alex seemed to need to have similar fears they needed to face in this book to find and reinforce the strength of their relationship. I really enjoyed Alex’s interactions with Craig’s family and the bride to be, Chloe.

They bring this warm, funny and at times awkward tone to this book that had me smiling and just wishing I could interact with them myself. I could see aspects of Craig in each of them and really got a sense of how growing up surrounded by them all might have been like. The strain between Craig and his brother and his action toward Alex was hard to read about, but it only made those who actually called him out on it even better.

The complicated relationship Craig had with EX also made me think about the first book and how it contrasted to his certainty and connection to Alex when they first started dating. I guess what I am trying to say that it was nice to see his character show just the slightest bit of unease because it felt so out of character. Likewise, it made more interesting to see how David’s character unintentionally came in between them because it eventually brought out a different side to Alex’s character as well.

This book reels you in pretty quickly and summarizes enough that I don’t even think you will have to be a fan of the series to follow along. And there were quite a few swoon-worthy moments in this book that I know readers will enjoy as well.

Q&A With The Author:

Today I’m very lucky to be interviewing Lissa Reed, author of Absolutely, Almost, Perfect. Hi Lissa, thank you for agreeing to this interview. Tell us a little about yourself, your background, and your current book.

Hello, hello! I am a writer and tech wonk just trying to survive summer in Texas. I’ve been writing for as long as I can remember, and it tickles me positively pink to have produced three published novels! Absolutely is the third of those three, and it is – all at once – a British comedy, a family story, and the tale of two men who love each other and stand together against the wave of anxiety-inducing hilarity that is a family wedding.

What is your least favorite part of the publishing/writing process?

I suspect my answer is universal – the waiting! I am not a terribly patient person to begin with, and I am very bad at trying to work on other projects while one is pending. I have a bit of a one-track mind in that regard, and it’s a bit superstitious as well, you know, not starting or working on a new project while one is hanging out there. But I really need to work past that, because one of these days I’m going to climb right out of my skin with the waiting if I don’t find a way to cope!

As an author, is there one subject you would never write about? What would it be?

I don’t think it’s a subject so much as an entire genre. Alas, to my crime-novel loving mother’s eternal heartbreak, I am unlikely to write anything in the crime genre. I’m not afraid to kill off characters, it’s the technical, procedural parts I think I would bore myself to death with. If I ever did write something crime-ish, though, it would probably be something rather darkly satirical and a bit slapsticky, like the television show A Touch of Cloth.

When did you first realize you wanted to write?

I was quite young, in fourth or fifth grade. I started with poetry, I don’t know why – it’s not a form I’ve dabbled much in since. I was always a fairly voracious reader, and sometimes I was not terribly satisfied with the way things I was reading were going, so eventually I moved on into writing what I suppose now would be considered my earliest works of fanfiction!

How long did it take to write your book?

For this series I have averaged a book a year, a streak that I think will come to an end with my current project. It’s sort of intense, and I can only do so much work on it before I need a breather.

For Fun: Where is one place you’d like to visit you haven’t been before?

I am actually doing my darnedest to make this one happen this year, actually! I have wanted to visit Norway since I was 17 (that was…an unusually formative Winter Olympics year for me…I blame NBC), and I’m really working hard to finally do it! I have big plans for a week in Bergen this December, and I am terribly excited. It’s also going to be my first non-working vacation in a while so that’s just the cherry on the sundae. So, so, so excited!

More About The Author:

Lissa Reed is a writer of ﬁction, blogs, and bawdy Renaissance song parodies. She traces her early interest in writing back to elementary school, when a teacher gifted her with her ﬁrst composition book and told her to fill it with words. After experimenting with print journalism, Reed shifted her writing focus to romance and literary ﬁction and never looked back. She lives in the Dallas-Fort Worth area. Absolutely, Almost, Perfect is the third book in her Sucre Coeur Series.
Get to know Lissa Reed at lissareed.com; on Twitter @lissareedbooks; and on on Instagram at lissa_angeline.