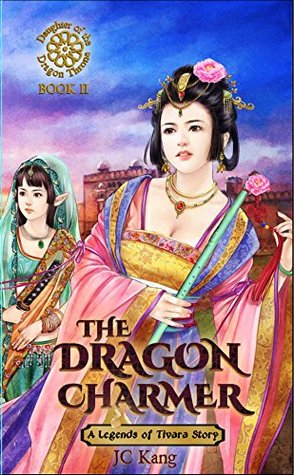 Dragon Charmer was a great follow up to Dragon Scale Lute. Picking up two years after book one, the readers find themselves getting to know a wiser, maturer and even slightly coy Princess Kaiya who works to keep peace in the city of Hua as well as other neighboring cities against the threatening promise of war following several—sometimes fatal—attacks.

All the signs and evidence continues to point to outside forces, but Kaiya sticks to her gut and lets her intuition to confirm the true, or expose the lie lead her through the journey she takes in Dragon Charmer.

I think what I loved most about this book was that we get to see how much Kaiya has grown and changed since the first book in regards to her ability speak on political matters and the greater influence and liberties she now has when it comes to her father, Wang Zhishen, the Tianzi of Cathay/Hua.

Moreover, I enjoyed getting to see Kaiya learn more about her abilities and discover a few new tricks along the way as the presence of dark magic and the fate written prophecy that says her destiny is to cross paths with Avarax, (the last dragon) continue to steadily loom in the shadows.

Not to mention the almost shell-like game to keep up with all of the spies, back stabbers, plotters, assassins and assassination attempts that happens. If I were around any one like Kaiya’s cousin Peng Kai-Long or Minister Hong Jianbin, I honestly do not think I would be able to sleep let alone dare to take my eyes off of them for even a second.

I will say this, I commend them for their dedication to the “cause” throughout the book as each of their plans represented the very essence of the waiting game; plotting and planning for years for everything to fall into place. And with every new character, I found myself going, “Okay, so who are you really working for?” or “Alright, who are you meant to stab in the back?”

I thought it was a great surprise that while on her way to attempt to secure peace with Madura, as the result of a political rouse, Kaiya ended up on her fated path to Avarax. I must also admit that I felt a bit bad for Kaiya once the truth about Prince Hardeep was reveled because she really liked him, but her character was just so much more tolerable in this book with him not around and not her main area of focus.

Least I forget the awesomeness and giddy effect every scene between or with Jie and Kaiya had on me. I am soo, soo happy that Jie not only returned but that she and Kaiya’s worlds collided (officially, anyway). I like how Kaiya came to trust Jie’s instincts and skills and how Jie’s objective perspective on Kaiya and the world she lived in added a bit a of humor and at times humility to both the narrative and Kaiya’s perspective as well.

I really enjoyed this book and I’m really excited for book #3 True Colors of Betrayal. I would highly recommend this book to anyone who is a fan of magic, mythology, and epic fantasy/adventure genres. 🙂