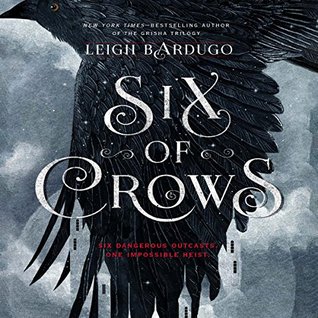 I heard a lot of buzz about this book and I was really excited to get into it. I enjoy heist concepts in books, TV and films. However, it was not exactly what I anticipated nor was it entirely attention grabbing. Even though I listened to the audiobook, I’m fairly certain that my opinion/rating of the book would be the same.

I thought the narrators for this book all did a great job in depicting the story and the characters. Even with the different narrators, you could always tell which character was which. It’s just that certain parts of the characters’ histories I found to be more interesting than the actual story.

I think is extremely well suited to be an audiobook, especially with so many different characters and perspectives the story switches between. The issues I had with this book were with the long journey to the Ice Court, Kaz’s backstory, the elusive lure of the Jurda Parem drug and Pekka Rollins.

At least 1/3 or so of this book seemed to focus on the crows just getting to the Ice Court, which made my interest in their journey flail. It took almost half way into the book for my interest in the characters to perk up. I mean, I liked Inej right away and the initial glimpse we have at the effects of the Jurda Parem drug was exciting, but then everything seemed to fall flat. I’m not sure if my lack of knowledge on the Grisha Series by Leigh Bardugo affects how interested I was in this book but from what I could tell, all of the characters were only driven forward by the promise of money, or revenge.

And I wasn’t invested in the success of their plans. I was even more disappointed when I learned of the reason for Kaz’s revenge plan to avenge his brother. Now, don’t get me wrong, I was all for his “Brick by Brick” destruction of Pekka Rollins until it was reveal his brother actually died after getting sick. I was actually hoping Pekka Rollins was the direct cause of his death—twisted, I know—but he wasn’t.

Moreover, what happened to Kaz and is brother when he was younger turned out not to be an isolated incident. Rollins was scamming people left and right. And when we finally do get to see more of Pekka Rollins, his character did not live up to intimidating image Kaz has painted for the reader/listener throughout the book.

Lastly, I would have liked to had seen more interest or talk of the Jurda Parem in the first half and middle of the book leading up to their arrival to the Ice Court as it was the whole reason they were venturing to the Ice Court to break out the scientist.

Nevertheless, I was not entirely at odds with this book. As I said, I liked the backstories for all of the characters, the sharp banter among the crew and the cool abilities of the Grisha people.

Moreover, out of all of the characters, I think I liked Inej and Jasper the most. They were the only ones of the team who seemed really close and honest with each other and with those around them—save for Jasper’s hidden talents.

I thought this book was good, just not as thrill driven as I thought it would be. I am interested to see what happens in the next book, Crooked Kingdom.

Thanks so much for checking out my review! I hope you all give this book a go and see how you’d like it for yourselves. I highly recommend this book for other lovers of Paranormal and Heist fiction with hints of an urban/old-town type society.

4 thoughts on “Audiobook Review: Six Of Crows (Six Of Crows#1) by Leigh Bardugo”