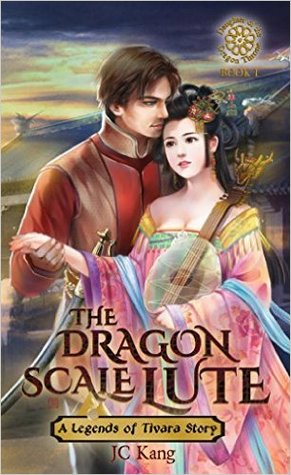 I really enjoyed this story; the culture and history details incorporated into the narrative were fantastic. I love all things culture and history related, so I think the author does a great job immersing the reader into this feudal-like era while the story simultaneously unfolds through the perspective of the three main characters.

Jie (half-elf/spy for the black lotus clan and my favorite of the three), Tian (Kaiya childhood friend and black lotus spy), and Kaiya (Princess of Hua or Cathay, daughter to the Tianzi, Wang Zhieshen and the sudden welder of hidden musical magic abilities.)

What I found interesting about Tian was the fact that it seemed like he ultimately was trying to bring honor back to himself and to his name while trying to protect those he stil cared about (loved) from his old life aka Kaiya.

And Jie? Besides being immaculately skilled, with her natural elf senses, combat, and magic and just in general a badass and funny, her character also seemed desperate to fit in among those around her because of her difference.

Side note: Just made me wish she were fully aware of how cool she actually is and how important she was to the story.

Additionally, despite Kaiya’s obsession with Prince Hardeep, which really made me think a bit less of the stronger and more confident character she was becoming, I felt like this book kind of had everything: espionage, politics, love, magic, spies and assassinations? Ooooh my!

I do think I should mention that this book (and I suspect the entire series) resembles that of an epic fantasy tale and with the level of details and at times slow narrative pacing, the digestion period could be longer than a week, depending on how fast of a reader you are. In addition, with the sexual content in some of the scenes in this book, I felt like it was more for an older audience than the general YA readers. All in all, I give this book a high three stars: 3.95, which seems silly, so rounded up– 4 stars!

Check out this Book Excerpt:

Closing her eyes, Kaiya plucked out more notes. The book from the Hall of Pure Melody suggested a skilled performer could project the emotion of a song. Yet for all the happiness this piece embodied, only melancholy trudged in the verses she played. Align your spine, the book implored. Let your heart impel your voice. Kaiya adjusted her posture and the vibrations spread throughout her.

There it was, the ocean of power from before, dripping in small drops, the rhythm setting the beat of her music. The song seemed to change of its own accord, and Kaiya’s brain summersaulted in her skull.

Lifting her hand from the strings, Kaiya opened her eyes. Though she’d stopped playing, the music trailed off in the echoes.

Tears streaked Xiulan’s cheeks, while Kai-Hua and some of the handmaidens freely wept. General Lu…

He gawked at her. With sadness or anger, it was impossible to tell. Bolting up, he spun on his heel and stumbled out of the courtyard. His officer trailed after him, while Chen Xin and Zhao Yue looked on with what could only be described as bewilderment.

A cloaked figure materialized out of nothingness, just on the other side of her guards. The pipa slipped from Kaiya’s startled hands and hit the pavestones with a discordant groan. Shaking their heads, Chen Xin and Zhao Yue both swept dao swords from their scabbards and backed into a defensive position.

Chen Xin pointed the tip of his weapon at the stranger. “Identify yourself.”

The man strode forward. His hands made no move toward the thin longsword hanging at his side.

The guards sprang into action, attacking in a synchronized flash of blades that would have eviscerated even a highly skilled warrior. Yet the intruder blurred through the deadly barrage and arrived on the other side unscathed. Without looking back, he waved a hand at the guards, sending both tumbling to the flagstones.

Interposing herself between Xiulan and the intruder, Kaiya fumbled for the curved dagger tucked in her sash. Not that she stood a chance against someone who could effortlessly defeat two of the realm’s best swordsmen. Her chest squeezed around her pounding heart.

A Chinese Medicine Doctor and Martial Artist by trade, JC Kang would have never started writing fantasy stories save for two fluke coincidences.

In the Christmas of 2010, while cleaning out childhood junk from his mom’s house, he came across his old Dungeons and Dragons campaign world. Before relegating the binder of maps and notes to the trash where it belonged, he decided to peek back and see what his 13-year old self had created.

He couldn’t help but laugh at the silly ideas that had crossed his teenage brain. Rivers flowed uphill. Empires produced resources out of thin air. However, a few interesting premises had potential.

For the next six days, he redesigned his world, taking into account things he’d learned over the last 25 years. Advanced stuff like gravity, evolution, and supply and demand.

On the seventh day, he rested. Looking at his glorious creation, he was hit by the realization that he’d never play D&D again.

A month later, the second event occurred: three weeks of major snowstorms.   Stuck indoors for days at a time, he used his skills as a professional technical writer and pumped out a 120k word novel set in this world… only to find out that fiction writing and technical writing were two different beasts.

He set off to study the craft, and learned advanced ideas like characterization, point of view and tension. After revising the first book, he wrote a prequel. After the prequel, he wrote a sequel. And finally, he wrote the prequel to the prequel: the Dragon Scale Lute.

Prizing is provided by the author, hosts are not responsible. Must be 13 or older to enter and have parental permission if under 18. Void where prohibited by law. No purchase necessary to win.

Thanks so much for reading, guys. xoxox