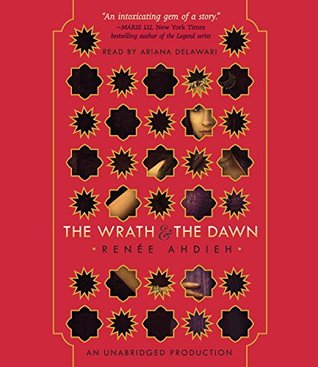 I’m a bit jealous that I was not able to get through this book sooner. This book literally made my month! And while getting surprised with a puppy this month was also very exciting, the past two and a half weeks of training have not been -_-.

Getting back to this amazingly entertaining, suspenseful, magical, mythical, culture-filled enticing book, I was very curious about how the author was going to take such a well-known (and over told) premise and make it anew. A Thousand and One Nights is among my short list of favorite fairy tales/myths, so I was even more excited when I realized that The Wrath And The Dawn was about 5% A Thousand and One Nights and 95% of original content.

There are so many things that I love about this book: strong and active female character who not only sets out to fight for her late best friend, but for all of the young girls who come before her. Shahrzad remains in control of her emotions, keeps her secrets close to her chest and for such a young character, (16) she puts all the other YA fiction teens to shame. Is it any wonder Khalid falls for her? The answer here is “no.”

From start to finish, it is a suspenseful and progressive narrative, with great pacing and I really loved the creative use of third person in this book. As well as, how the listener/reader gets a story within a story with Shahrzad’s stories.

I suspect it is the same with the written version as well, but the narrator does a great job of keeping the reader/listener engaged, but not ahead of the story. There were a lot of gasps and oh my goodness moments while listening to this audiobook.

Moreover, I love it when a book/story surprises me up until the very end. I also like that through out the book there were moments where the author shows the reader that not all of the characters that have bad intentions or did something bad were malicious. I cannot wait to see what happens in the second book. This is definitely a book I would recommend to everyone and re-read a million times ^_^.

3 thoughts on “Audiobook Review: The Wrath And The Dawn by: Renee Ahdieh”