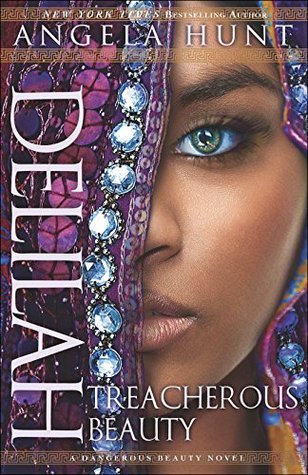 I received a copy of this book from the publisher in exchange for an honest review.

A Complex and Compelling Glimpse at One of the Bible’s Baddest Girls  Life is not easy in Philistia, especially not for a woman and child alone. When beautiful, wounded Delilah finds herself begging for food to survive, she resolves that she will find a way to defeat all the men who have taken advantage of her. She will overcome the roadblocks life has set before her, and she will find riches and victory for herself.
When she meets a legendary man called Samson, she senses that in him lies the means for her victory. By winning, seducing, and betraying the hero of the Hebrews, she will attain a position of national prominence. After all, she is beautiful, she is charming, and she is smart. No man, not even a supernaturally gifted strongman, can best her in a war of wits

Like most people, I’m sure will be or were, I was initially drawn to this book because of the cover. I know how that sounds, but look at it. It’s captivating. My interest was only further piqued by the enticing promise of the book’s synopsis. Moreover, while this book is the third installment of a series, it can be read as a stand-alone. This book and story, for those unaware, is structured on the biblical premise/story of Samson from Judges 13-16.

Putting aside the fact that I rather enjoy stories, which take well-known myths or pieces of history and adds a bit of content and character to the legends, so I commend the author for doing that with the story of Delilah & Samson for attempting to bring history and personality to these two characters. Based off of what I know and understand about their connection, Delilah is believed to have been heartless and money-driven Philistine, (perhaps, even a Israeli who betrayed Samson for money) who tricked Samson into falling for her only to betray him. Where as Samson is portrayed as this powerful, physical and influential, protector/savior for the Israeli people who fell in love with a beautiful trickster.

However, Angela Hunt depicts the story of two young individuals from two different worlds are forced into some of the most unpredictable of circumstances; particularly, Delilah, in this case.

With that being said, I gave this book 3-stars based off the lack of progressive growth among the main characters, the decision to link Delilah’s lineage to Southern Egypt/Ethiopia and the sluggish pacing of the narrative which did not always grab or hold my attention.

Regrettably, it seemed as though it was longer than it needed to be. It also did not help the fact that for most of the book both Samson and Delilah’s personalities remain consistently the same, despite the passage of time: naive and passive, respectfully. It was bothersome to continuously watch Samson breeze past warnings and times for caution and to see Delilah’s character be passively lead and directed from one place to another, from Egypt to Gaza and to the Valley of Sorek etc. and never seem to be present.

Moreover, while some will object to Delilah’s lineage being connected to Southern Egypt/Ethiopia due to believability and accurately, my issue with it was on a different scale. In fact, I loved the idea. It was another reason I was interested in reading this book. Delilah in Hebrew is after all Layla, meaning darkness (be it a play or words or not in correlation to the woman’s skin tone). Whats more, research has proven that over and over and over again, Delilah’s background, lineage and original allegiance ties were never made clear. She seemed to be a “nobody.”

Subsequently, this brings the focus to one of the topics I tussled with while reading this book. With the amount of misogyny/ patriarchal disadvantages the women in this novel (and time period) faced, I felt it was entirely possible that the threat of slavery was something that could have been left out. As a result, it made me distrust the author’s sincerity and treatment of Delilah’s character.

As her ethic and religious background are never stated/clarified—though in all sincerity, she could have easily have been a Philistine—it begs the question, did the author decide to make Delilah (born in Egypt) of Ethiopian/Greek decent simply to play up (or exploit) the slavery plot point/possibility? After suffering at the hands of her stepbrother, Achish and the power he gained with the death of his father, and the loss of her mother, Delilah’s story is arguably challenging/difficult enough and lacked the need for that aspect in the narrative.

I also had an issue with the author’s push to make Delilah’s character a “nobody.” She grew up in Egypt; her parents were of Cush and Crete (Cretan) decent. That does not make her a nothing or nobody and I felt that the author lost sight of that.

This book was extremely well researched and it is incredibly clear that the author’s goal with this story was to humanize both Delilah and Samson and emulate that their story together may not have been as straightforward or as black and white as it is commonly believed. Overall, there is a love and empathetic connection between them in this book, but the story, in my opinion, was not something to rave about.

If you really, really enjoy biblical fictions, historical fictions or obsessed with the story of Delilah and Samson, then I’d suggest you pick up this book and judge it for yourself. 😉