I’ve finished so much this month! XD

May, for me, was a pretty good book month based on the material I got through. And just in case you haven’t seen them yet, be sure to check out my recent non-blog or reading challenge book review posts for, The Fold by: Peter Clines & Game of Fear by: Gledé Browne Kabongo. Two very different books with unique twists entirely their own.

I’d also like to mention that besides my #2016readingchallenge books, I will be reading The Mother by: Yvvette Edwards  for a June 15th blog tour date and Wander This World by: GL Tomas. (I love these girls) :-). Now without further ranting, I present to you the reviews for this month’s reading challenge books.

So much fun reading this book! I am glad that  the book lived up to all of the great things and great buzz I heard about it. 🙂

Sixteen-year-old and not-so-openly gay Simon Spier prefers to save his drama for the school musical. But when an email falls into the wrong hands, his secret is at risk of being thrust into the spotlight. Now Simon is actually being blackmailed: if he doesn’t play wingman for class clown Martin, his sexual identity will become everyone’s business. Worse, the privacy of Blue, the pen name of the boy he’s been emailing, will be compromised.

With some messy dynamics emerging in his once tight-knit group of friends, and his email correspondence with Blue growing more flirtatious every day, Simon’s junior year has suddenly gotten all kinds of complicated. Now, change-averse Simon has to find a way to step out of his comfort zone before he’s pushed out—without alienating his friends, compromising himself, or fumbling a shot at happiness with the most confusing, adorable guy he’s never met.

For my Simon vs. The Homo Sapiens Agenda review, click HERE.

There are just some writers you want to follow around and learn from. Mr. Larson is one of them. 🙂

On May 1, 1915, with WWI entering its tenth month, a luxury ocean liner as richly appointed as an English country house sailed out of New York, bound for Liverpool, carrying a record number of children and infants. The passengers were surprisingly at ease, even though Germany had declared the seas around Britain to be a war zone. For months, German U-boats had brought terror to the North Atlantic. But the Lusitania was one of the era’s great transatlantic “Greyhounds”—the fastest liner then in service—and her captain, William Thomas Turner, placed tremendous faith in the gentlemanly strictures of warfare that for a century had kept civilian ships safe from attack.

Germany, however, was determined to change the rules of the game, and Walther Schwieger, the captain of Unterseeboot-20, was happy to oblige. Meanwhile, an ultra-secret British intelligence unit tracked Schwieger’s U-boat, but told no one. As U-20 and the Lusitania made their way toward Liverpool, an array of forces both grand and achingly small—hubris, a chance fog, a closely guarded secret, and more—all converged to produce one of the great disasters of history.

It is a story that many of us think we know but don’t, and Erik Larson tells it thrillingly, switching between hunter and hunted while painting a larger portrait of America at the height of the Progressive Era. Full of glamour and suspense, Dead Wake brings to life a cast of evocative characters, from famed Boston bookseller Charles Lauriat to pioneering female architect Theodate Pope to President Woodrow Wilson, a man lost to grief, dreading the widening war but also captivated by the prospect of new love.

Gripping and important, Dead Wake captures the sheer drama and emotional power of a disaster whose intimate details and true meaning have long been obscured by history.

I’m in love with Mindy and I think I always will be. 🙂 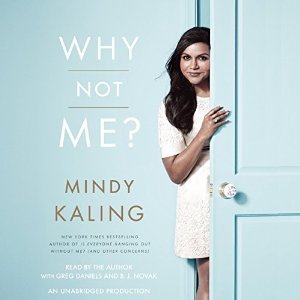 In Why Not Me?, Kaling shares her ongoing journey to find contentment and excitement in her adult life, whether it’s falling in love at work, seeking new friendships in lonely places, attempting to be the first person in history to lose weight without any behavior modification whatsoever, or most important, believing that you have a place in Hollywood when you’re constantly reminded that no one looks like you.

In “How to Look Spectacular: A Starlet’s Confessions,” Kaling gives her tongue-in-cheek secrets for surefire on-camera beauty, (“Your natural hair color may be appropriate for your skin tone, but this isn’t the land of appropriate–this is Hollywood, baby. Out here, a dark-skinned woman’s traditional hair color is honey blonde.”) “Player” tells the story of Kaling being seduced and dumped by a female friend in L.A. (“I had been replaced by a younger model. And now they had matching bangs.”) In “Unlikely Leading Lady,” she muses on America’s fixation with the weight of actresses, (“Most women we see onscreen are either so thin that they’re walking clavicles or so huge that their only scenes involve them breaking furniture.”) And in “Soup Snakes,” Kaling spills some secrets on her relationship with her ex-boyfriend and close friend, B.J. Novak (“I will freely admit: my relationship with B.J. Novak is weird as hell.”)

For my Why NOt Me? audiobook review, click here.

And lastly, for my #2016TBRpile challenge I settled on Demon Within (The Silver Legacy #2) by Alex Westmore–another long over due book to get through.

As always, thanks for reading. I hope you liked the reads this month and be sure to come back to check out what else I’ll be reviewing next ^__^