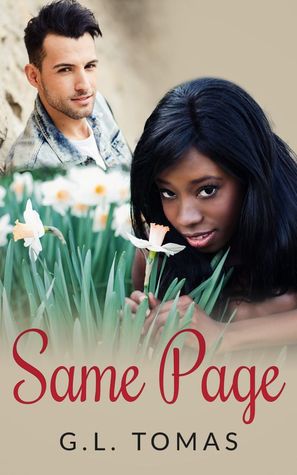 Synopsis: Naima vibed with Timothy from the first moment they met. Attraction wasn’t supposed to happen, but it did with no time to turn back.

Timothy knew better. But that kiss made him forget about his girlfriend and he would do anything to get another chance to kiss those lips.

*Same Page Book One in a duology. It is suggested for Mature audiences due to strong sexual content and slight drug use.

I’m back again with a GL Tomas book review! I feel like I could do this each week, to be honest XD While Same Page is another duology by the duo, it differs from the F*THS NA duology as this book felt more like an ensemble piece with the supporting Symposium co-workers, which drew the main characters, Tim and Naima, closer together as the book went on.

In fact, a part of me wanted there to be a separate chapter or spin-off story focusing just on the workers of the Symposium because they were all too crazy-funny not to have their own spotlight.

The chemistry between Naima and Tim’s characters is undeniable and if it weren’t stated in the synopsis, the reader would never guess Tim was otherwise ‘attached’ based on his actions and reactions around Naima.

In fact, the two almost immediately resembled that of a budding couple starting a relationship rather than that of simple close friends/co-workers having a fling.

I found that the two of them complemented each other well and gave the other a sort of balance. Tim with is off-the-cuff honestly and Naima with her kind of live in the moments attitude. One of my favorite parts about this book was that fact that Ruby (aka Sailor Moon) who was friends with both Tim and Naima and remained loyal and honest with each of them while keeping the other’s confidence.

(Which I know is not always an easy thing to do.) The situation they found themselves in was not idea and I found it hard to fit the blame on anyone in this book. Yes, Tim should have ended things with his girlfriend, but I respect him for not wanting, or attempting, to do it over a Skype call and deciding to do it in person.

While I felt the ending was a bit rushed, what with waiting for Tim and Naima to finally cave and give into their feelings for each other, I am really looking forward to how Tim and Naima deal with each other now that all the cards are on the table. 😉

Thanks for swinging by and checking out my review for Same Page. Be sure to check this book and other books by my favs GL Tomas. You’ll be so happy you did! 🙂