In this week’s Daredevil episode, “Rabbit In A Snow Storm,” written by Marco Ramirez, we saw our hero struggle with his morality as he contemplated the true balance of the law vs his version of justice. We also meet the New York Bulletin reporter, Bennie Urich and the infamously powerful, Wilson Fisk.

Alex Morf as John Healy surrendering to the cops.

It all starts when an eerily, calm and overtly confident killer, Alex Morf ‘s John Healy is arrested for murder, and Foggy and Matt are approached by James, Fisk’s right hand man, to take the case. Matt is immediately against the idea after James comments on Karen’s association with the firm (that and James’s eagerness to hire two un-established and fresh-out-of-law-school newbie attorneys with a large, up front payment). Curious to figure out whom James really works for and what he’s truly after, Matt agrees to take the case.

Meanwhile, Bennie (Ben) Urich, a New York Bulletin reporter,  tries digging up some information on a rumor spreading around Hell’s Kitchen of a new player who’s replacing all of the established and well-known ‘competition’ on the streets. Bennie is warmed by a close contact to drop it, and even pushed by his boss as well to give up and let go of the organized crime articles due to the decline of the newspaper market. With the added incentive, from his boss, that is could cost him his job, which could jeopardize the health benefits he needs for his wife.

Karen speaks with Union Allied’s attorney (Photo thanks to Theothermurdockpapers.com)

While Karen is propositioned with a legal ‘gag’ against discussing any further details about the Union Allied ‘incident’. And for her silence, she is offered six months pay and a legal ‘promise’ that states no future lawsuit against her will be pursed since she broke a non-disclosure agreement with Union Allied during her time of employment. Unsettled by this, Karen goes to visit her former co-worker’s (Daniel Fisher) wife in an attempt to unite against the formidable Union Allied, but Miss Fisher informs Karen that she too was offered money to stay quiet which she accepted. Morally plagued to tell the truth, Karen visits Bennie in the hopes that he’ll want to get to the truth as well.

Back at Nelson and Murdock, Foggy and Matt grow suspicious of the case’s circumstances as all the elements lean in favor of their (clearly guilty) client going free. While in court, Matt discovers that James has rigged the case to ensure Healy goes free by blackmailing a jury member. In an attempt to secure the an untainted verdict, Matt gets rid of the leverage he suspects James and his people have over a jury member.

Matt listening intently in the courtroom to the ticking of James’s watch. (Photo thanks to theothermurdockpapers.com)

However, when it’s time for the verdict, Matt discovers that James was still able to control the jury’s decision. Now, there is a moment  that stood out for me, in which Matt removes his glasses as if a show of him taking off one mask to put on another. Daredevil (Matt) tracks down Healy after he’s released, but Healy doesn’t go down without a tough fight (almost felt like Healy was expecting Matt to show up). Pinned down and forced to tell Matt who he works for (and ultimately whom James works for), Healy then commits suicide by impaling his head onto a rusty, gate spike.

My Over all thoughts on this episode:

Matt follows James after he leaves his & Foggy’s office (Photo thanks to Nerdythingsthatdontsuck.com).

I thought it was pretty risky for Matt to follow James after their meeting in his office and reckless of him to so openly verbalize his distrust in James and the type of business he was apart of. I mean, hello this guy sets up murders and works for Wilson Fisk, stop trying to get on his radar Matty. You’re causing enough trouble as it is as the vigilantly, but I digress. I did, however, really enjoy Charlie Cox’s performance in this episode depicting the beginning stages of Matt’s inner moral struggle with his decision to take on all the evil that creeps in the corners of Hell’s Kitchen.

I liked that Karen went to see Daniel’s wife. I also liked that she recognized the attempt at the legal cover up of Union Allied’s corporal corruption and that she wants to do what is morally right for all those affected. Moreover, I am liking the layer complexity that her character is starting to show. In the previous two episodes, she seemed almost like a damsel in this constant state of fragility, so she came across as being kind of annoying.

The whole gun situation in the bowling alley did not feel 100% legit. I mean, don’t places like that have better security than that? How is it that two men have made it in and out of there with a gun? Perhaps it’s the neighborhood, or there is a super secrete back entrance that we just weren’t privy to, but come on, children and families visit the facility all the time.

Scenes that I LOVED

Vincent D’Onofrio as Wilson Fisk as he ‘shops’ for art. (Photo Thanks to Flickeringmyth.com).

The first scene is Fisk’s first official appearance in the art gallery. He looks like a creepy, uncomfortable robot, I love it. Before we see his face, we get a close up of his hand, then a profile shot of him staring statically at a blank canvas.  Something about this shot just seems extraterrestrial, and I’m excited for Vincent D’Onofrio in this role as Wilson Fisk. In my opinion, he does a good job at evil, intimidating, gritty, complex and troubled characters, so I know it’ll be a treat to watch him in Daredevil.

Matt resting outside of the church. (Netflix Promotional Still)

Second on the list, is the scene of Matt seated outside of the church following the opening credits. I took a moment and paused the scene just to take in the broken (internally & physically) posture and expression of his character. As if he sat down not only to rest for a short while, but to take a moment to find some peace amongst the monsters or demons rattling around in his head. He has clearly had a rough night and the evil he fights at night evidently plagues him in the morning. The season of Daredevil seems to (so far) immediately piggy back off each episode, so each new episode brings the viewers directly into the next day. And if you recall episode number two “Cut Man” left Matt in bad shape after he went up against the Russians in Hell’s Kitchen to rescue a young boy. (If you don’t remember the details from last weeks review or if you have not seen it yet, you can find it here.)

Matt and the priest have a small chat. (Photo Thanks to Catholicvote.org)

Unpausing the scene, Matt’s approached by the priest from the pilot episode, (the review for that is here,) because those glasses that he wears do little to hide the pain and burden written all over his face. The priest offers Matt the opportunity to talk but he declines it. And the sadness in his voice when he says, “some other time, maybe,” is enough to make you just want to hug a puppy to make you feel better (why a puppy? Simple, puppies make people smile).

The next scene on my list was between Foggy and Healy in the interrogation room at the police station. Foggy goes to talk to Healy on his own after James ‘hires’ them and watching Healy as Foggy asks him details about the murder? Just, wow. Talk about an unnerving presence. I was so relieved when Matt showed up when he did because I was concerned that Healy would leap over the table and attack poor, innocent, and naive Foggy for no reason. It was just something about John Healy in this episode that that put me in a state of unrest. Kudos to Alex Morf for his acting range, but…*shudder*.

Matt gives his weighted closing statement in the courtroom (Photo Thanks to Douglas Ernest).

I loved closing statement by Matt in the courtroom as well in which he talks about the tethered line between “…good and evil, right and wrong..” and the core meaning of morality. Matt argues that, “The delineation between the two is a sharp line, [and] sometimes it’s a blur…” and there are some who cannot see the ‘sharp line, only the blur‘. He is referencing, of course, to his client John Healy as well as those he faces as the vigilantly (Daredevil). Moreover, in some ways I believe Matt is even talking about himself as he lives the life of a lawyer by day and justice dealing vigilantly by night. 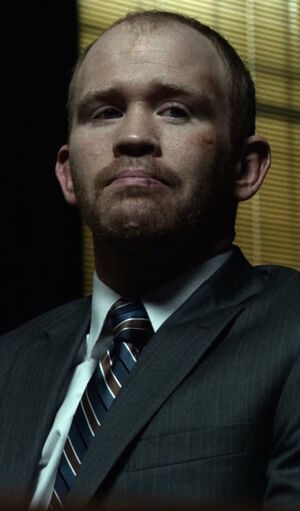 Alex Morf as John Healy on trial for murder.

Moreover, before siting down Matt, coyly makes a point to state, “that beyond the wall of the court and the sanctity of the law,” that his client (based on the law and the facts) should be released and acquitted of all charges. But, (and this is my favorite bit) Matt smiles, as if unable to help himself as he tells the court, Healy could very well be faced with a different kind of judgment, “…of his own making.” Obviously, Matt is referring to himself but in such a subtly implied  way and I just feel that with those moments, (as a viewer ) it is like being a part of this kind of small, but really big inside joke.

Episode rating: 7.5/10. I liked this episode, but after last week I kind of felt like this one was a bit lack-luster. However, I thought it was great that we did get to see a good amount of  investment in the characters themselves and what kind of decisions might carry them through the remainder of the season. That is another reason I am loving the extended movie feel/experience with this reboot of Daredevil. I can’t wait to see what happens next week now that the ‘king’ is officially in Hell’s Kitchen. 🙂

So, until next week,