Well, who knew a dead castor clone could bring so many people together?

This week’s Orphan Black episode, “Formalized, Complex and Costly,” written by: Chris Roberts, set in motion a much needed Sarah and Art reunion as well as an interesting three-person-dissection teamed between Cosima, Scott and Felix over the dead Castor clone’s, Seth, brain and the secrets it possibly holds.

Art reaches out to Sarah after he gets a lead on the Proletheans, (Mark and Gracie.) This sets Art and Sarah off to track the two down. While following up on the lead, Sarah discovers from Alexis, the Proletheans’ former mid-wife, that Johanssen harvested Helena’s eggs and implanted Helena as well as his daughter, Gracie with an embryo. (To breakdown, or attempt to understand Henrik Johanssen’s clearly ego driven actions behind this would take too much time, so for now I will just say that it turns my stomach that he did this not only to Helena, but to his daughter as well. Not to mention the Proletheans belief in this act as being ridiculous endeavor.)

Moving on–When Art and Sarah’s chat with Alexis leads them to follow up a lead on Johanssen’s car, it seemed as though Art was sad and something was troubling him. Art reveals to Sarah that his last encounter/contact with Beth was on the day that she died and I got the impression that he was not only missing Beth in that moment, but also Sarah/Beth as his partner. He comments on how similar they are to one another.

Else where with newlyweds Gracie and Mark, Mark reveals his secret (or half of his secret), to Gracie and tells her that he was a plant for the military in the Prolethean community and that for him to “get out,” he needs to find something for them. Mark believes that Gracie’s father, Henrik, may have given the original samples (donor samples) to a former business associate, William Finch. Gracie offers to visit Finch on her own in order to protect Mark from Finch, but unsuccessfully returns with a box full of note books and old papers.

I say unsuccessfully, but in actuality I have a feeling that the dismissal of the note books and papers was a mistake on Mark’s part as, like with Cosima’s The Island of Dr. Moreau book, they  could hold the key or at least some information on how to solve some of the genetic deteriorating/glitches that the Castor and Leda clones are facing.

As Scott and Cosima cut into Seth’s skull for his brain, with the calm and collected help of Felix, Cosima goes on a cosmos/’what if’ rant about death that worried me. She is usually the most positive and put together one among the clone club. Even though she is up on her feet and back in the lab, her personality seems darker and sad this season. After coming so close to death and still being at risk, it makes me worry about her mental state through out the rest of the season. I also hope, Scott and/or Felix pick up on it, like soon.

Still on the case to track down Mark and Gracie, Sarah gets Art to admit that he was in love with Beth, but he never got the chance to tell her.   With the death of Seth, ‘Mother’ is furious with Rudy for “putting him down,” and when the two talk about Seth’s final condition, Rudy psychologically regresses and shows an uncomfortable level of dependency to Dr. Coady aka Mother, which I wasn’t prepared for.

I will say that while we were with Dr. Coady’s faction, I got to see a tease (hopefully a hint of a future interaction) scene between Helena and Rudy. Even though the two spoke between a cell door, it was like watching to masters face off and if Paul hadn’t shown up when he did, I feel like  we would have seen a full on brawl. If (when) the two do fight, my money is on Helena. I mean just look at the way she looks at him.

Helena & Rudy have a “chat.”  (Screencap property of BBC America).

On the outs of this week’s clone revelations, Alison’s political campaign for school trustee slash drug operation was in full swing and, if it wasn’t already clear from Alison’s don’t take no for an answer personality, running both a campaign and a drug operation smoothly is a no-brainer. I simple love Alison; she’s driven, focused and a dedicated achiever.

My second favorite scene in this week’s episode was in Alison’s garage just after Marcy walks in on her and Donnie, preparing soap for their campaign. Marcy first attempts to offer a proposal (bribe) to Alison and Donnie with a new house that has come on to the market, but Alison doesn’t bite and refuses to back down. Marcy then goes after Alison’s feelings/pride by remarking that none of the parents would ever be in favor of her for the school trustee because of her past drinking problem, regardless of how much soap she sells. And Alison’s reaction, of course, was not to back down and sent Marcy on her way with a comment on her “conniving, second-rate realtor” personality. Oh, how I love Alison.

Luck strikes as Sarah unsuspectingly runs into Gracie in a dinner while trying to track her and Mark down. Sarah tries to get her to reveal where her darling husband is, so she tells Gracie that Mark, too is a clone like herself and Helena. Overwhelmed by the news, Gracie breaks down and Sarah learns that Mark has gone to have a “chat” with William Flinch. Cosima rings Sarah with the startling news that they and the Castor clones are related just before Sarah comes across a very dead William Finch in his barn and a disappointed Mark. (Now that I think about it, I guess Seth’s dead brought together long lost siblings as well, huh). 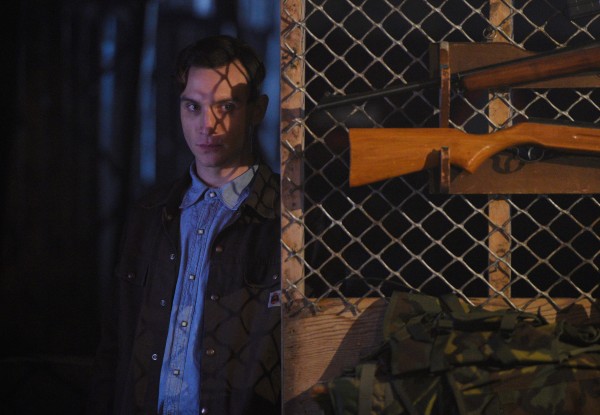 After hearing that the Leda and Castor clones are brother and sister, Mark is driven from the barn with the urge to track down Gracie and explain when he’s gunned down by Mrs. Johanssen (Gracie’s mother), Bonnie.

Episode rating: 7/10. Mark’s last words to Mrs. Johanssen were that he loved Gracie, and I truly believe that he did. He wanted to rescue her and himself from the conformity of their lives, and I believe that if he found the samples, he would have left the Military officially so that they could be together.

However, I think that it is a good thing that Mark & Seth have both died at this point, regardless of the fact that we know now that the Castor clones are related to the Leda clones, I will always favor the original clone club because I’ve followed their development over the past two years from the start.

A slight scene in this episode that made me curious was between Rachel and Dr. Nealon (who strikes a remarkable resemblance to John Noble) during a recovery session/motor/speech skills test. Where she learns that to the outside world she has died and that her recovery  is set to be a long one, there is a glimmer in her eyes that I caught, but at the moment I can’t place what it meant. Needless to say, it is something I’ll be looking for during the rest of the season.

I know it’s unrealistic to hope that Rachel will come over to the good side and enter the clone club, but if Helena can do it…you just never know.

In addition, with the discovery, or revelation that the Castor clones are actually the Leda cones’ brothers, I guess now my telekinetic theory is out the window. I was, however correct with my guess that the Castor clones were indeed deteriorating at a quicker rate than the Leda clones, only on a neurological level. Lastly, that’s two weeks in a row that we’ve witnessed a Castor clone’s death. I wonder….if next week we see Rudy, bite the bullet, sort of speak. I can’t wait to find out.

Until the next episode,