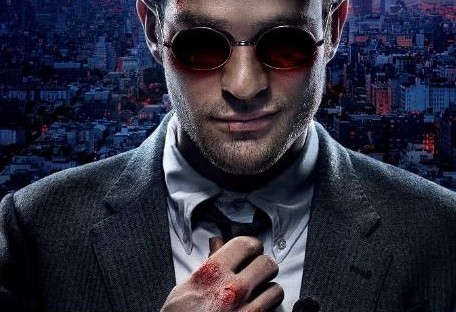 In this week’s Daredevil episode, “Rabbit In A Snow Storm,” written by Marco Ramirez, we saw our hero struggle with his morality as he contemplated the true balance of the law vs his version of justice. We also meet the New York Bulletin reporter, Bennie Urich and the infamously powerful, Wilson Fisk.

Alex Morf as John Healy surrendering to the cops.

It all starts when an eerily, calm and overtly confident killer, Alex Morf ‘s John Healy is arrested for murder, and Foggy and Matt are approached by James, Fisk’s right hand man, to take the case. Matt is immediately against the idea after James comments on Karen’s association with the firm (that and James’s eagerness to hire two un-established and fresh-out-of-law-school newbie attorneys with a large, up front payment). Curious to figure out whom James really works for and what he’s truly after, Matt agrees to take the case.

Meanwhile, Bennie (Ben) Urich, a New York Bulletin reporter,  tries digging up some information on a rumor spreading around Hell’s Kitchen of a new player who’s replacing all of the established and well-known ‘competition’ on the streets. Bennie is warmed by a close contact to drop it, and even pushed by his boss as well to give up and let go of the organized crime articles due to the decline of the newspaper market. With the added incentive, from his boss, that is could cost him his job, which could jeopardize the health benefits he needs for his wife.

Karen speaks with Union Allied’s attorney (Photo thanks to Theothermurdockpapers.com)

While Karen is propositioned with a legal ‘gag’ against discussing any further details about the Union Allied ‘incident’. And for her silence, she is offered six months pay and a legal ‘promise’ that states no future lawsuit against her will be pursed since she broke a non-disclosure agreement with Union Allied during her time of employment. Unsettled by this, Karen goes to visit her former co-worker’s (Daniel Fisher) wife in an attempt to unite against the formidable Union Allied, but Miss Fisher informs Karen that she too was offered money to stay quiet which she accepted. Morally plagued to tell the truth, Karen visits Bennie in the hopes that he’ll want to get to the truth as well.