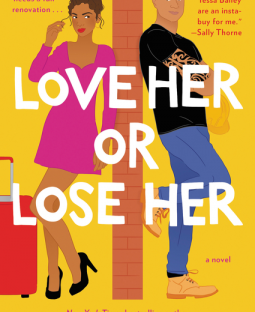 Rosie and Dominic Vega are the perfect couple: high school sweethearts, best friends, madly in love. Well, they used to be anyway. Now Rosie’s lucky to get a caveman grunt from the ex-soldier every time she walks in the door. Dom is faithful and a great provider, but the man she fell in love with ten years ago is nowhere to be found. When her girlfriends encourage Rosie to demand more out of life and pursue her dream of opening a restaurant, she decides to demand more out of love, too. Three words: marriage boot camp.

Never in a million years did Rosie believe her stoic, too-manly-to-emote husband would actually agree to relationship rehab with a weed-smoking hippy. Dom talking about feelings? Sitting on pillows? Communing with nature? Learning love languages? Nope. But to her surprise, he’s all in, and it forces her to admit her own role in their cracked foundation. As they complete one ridiculous—yet surprisingly helpful—assignment after another, their remodeled relationship gets stronger than ever. Except just as they’re getting back on track, Rosie discovers Dom has a secret… and it could demolish everything.

I thought this book was a fairly good read. There was great chemistry between the two main characters and I could feel their history and connection with one another come off of the page. But I have to be honest, it took two full-chapters for me to invest in Dominic’s character😂 .

In the beginning, I was worried we were going to see his character as this overbearing, abusive ex-military husband but I’m happy to say that that is so far from the truth. His character was more complex and emotionally shut-off than Rosie’s character after being so unhappy in their marriage for so long.

Moreover, I also enjoyed the level of insight we were able to see with Dom’s character by the end of Love Her or Lose Her even if it was just scraping the surface.

Seeing Dom and Rosie go to therapy to confront the distance and issues between them felt real and dynamic because the sessions, although started as a joke, acted as the vessel they needed to get back on track.

And guys, these two were not just husband and wife, they were each other’s best friends. It made me root for them to mend what was broken between them.

I also liked that I could just pick up this book without having to read Hot & Hammered #1 but I suspect with the way the secondary characters were set-up in this book that the other book(s) in the series likely revolved around them but didn’t spoil much of their stories.

Hands down, Dominic’s character development was my favorite in this book because of where we see him at the beginning, but I ADORED Rosie’s breakthrough in this book. No longer settling, timid, or hesitant, we get the chance to see her character go after what she wants and follow her dream of opening up her restaurant 😊.

It was wonderful reading the amount of support Rosie gets from her close friends and those in the small community who believed in her.

With all of that said, there were a few details that made this book just ok. For instance, the focus of the story centers on characters of color in this small, southern-like town with the brim of prejudices/racism boarding along the edges of the Dom and Rosie’s lives.

I do not think this detail would have had an off-putting effect on me as a reader if the writer was also a POC who could pull from personal details or an inside perspective of what that might feel like. Much like my points made in a different review (If I Never Met You) the snip bits of details that we read Rosie bring up when talking about her mother feeling like an outsider while living in the town were sparse and shallow.

As if added to give the story, her character and the book this depth that was ultimately forgotten and irrelevant as it wasn’t something, Rosie herself has to face or struggles with. Which begs the question of its importance or purpose?

The second flag for me in this book came down to the fact that I didn’t find the story shocking. More like a slow-paced drama with two-notes; straight and narrow narrative with intense will-they, won’t-they scenes when Dom and Rosie were alone with each other. I did like some of these scenes because they were the best carriers for connection the couple had one another. When they’re apart I didn’t get much of the background information or the ties that anchored their love for each other, so I found those scenes to be passive.

The third flag for me in this book was the subtle ways in which Dom’s character did hinder Rosie’s character in his passive-aggressive actions and personality—which is why I thought he needed more character development 😫 . Without spoiling things here, he kept a lot of good and bad secrets from her without even blinking.

Actively and consistently taking away her choice, opinion and say in things that happened in their lives. From the little stuff, all the way up to the massive reveal toward the end. And to be honest, as the reader or his wife, I would not have forgiven or forgotten that easily like Rosie 😂.

But that’s just me.

Book received via Netgalley in exchange for an honest review.

Thank you for coming over and checking out my thoughts on Lover Her or Lose Her. If you’ve read the book and/or book one in Hot & Hammered and have a different opinion of it, I would love to hear your thoughts 😃.

To all those contemporary fiction and romance fiction fans who like stories about couples finding their way back to each other, I would recommend Love Her or Lose Her as your next #booktoread.  It has humor, it has angst, steamy scenes, a complex male lead, and lots of love.