How’s this week been treating ya? Swell? Maybe not so swell? Well, I have some fun news to share with you today. Remember the series I read and reviewed by J.C. Kang? Previously know as The Daughter Of The Dragon Throne, now the Dragon Songs Saga, is a historical, mythological, epic-high fantasy/adventure, sorcery fiction series.

J.C. reached out and told about a book re-launch party happening today, 10AM-9PM over on Facebook.  This launch party will include giveaways, author takeovers, and more! It is definitely something you don’t want to miss.

The world knows Kaiya as the Dragon Charmer.

After vanquishing the Last Dragon with the power of her voice, all she wants is to return to a quiet life of anonymity. Instead, the Emperor tasks her with an onerous task: negotiating with the aggressive Teleri Empire for the extradition of her cousin, who tried to murder the imperial family and usurp the Dragon Throne. 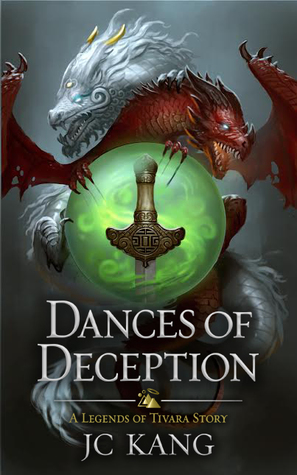 You can add Dances Of Deception to your GoodReads TBR shelf today, or start reading the entire series right now via Amazon. Did I mention books 1-3 are now on sale for .99c??!

I happen to have a giveaway link for a $10 Amazon gift card for you guys as well, courtesy of J.C. Kang himself.

Thanks so much for checking out the new cover for Dances Of Deception. The launch party for the book will be happening all day, 10AM-9PM so go check it out now, guys! ^_^