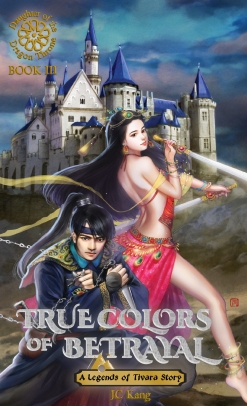 Funny enough, my first draft of this review originally resembled a kind of ode to the Legends of Tivara, Daughter of The Dragon Throne series and I went into this long speech about how much I enjoyed this book as being the last book in the series and how much I was going to miss all of these characters and the wonderful tales of Tivara. I’m happy to say that True Colors Of Betrayal is NOT the final book in this series, but has been, by far, my favorite.

In fact, I found that almost immediately after starting the book, I had a feeling that it would turn out to be my favorite from this series and I was not wrong. Although I think that my deep appreciation for this book and series comes from the fact that I’ve followed these characters from day one, this was still a great book.

Following immediately after The Dragon Charmer and Princess Kaiya’s battle with Avarax, we find ourselves catching up to Tian working as a “trades officer” in Iksuvi when Jie catches up to her old friend with news of Princess Kaiya’s arrival for the up and coming Northwest Summit. But it’s in this cold, unfamiliar city where the lives of Tian, Princess Kaiya and Jie are forever altered following a Telerian take over.

This book, unlike the first two is not based on the legend/prophecy of Princess Kaiya and the last great dragon, Avarax. And while I loved reading about Princess Kaiya discovering and developing her powers and her voice, I really liked the strong politics/war (though technically considered a territory conflict) elements that were in this book because the reader is shown a more realistic side to the characters and the world that they’ve been living in up until this point.

All of the strengths, skills and challenges we’ve seen from Tian, Jie and Princess Kaiya over the past three years or so (book wise) felt like walks in the park compared to True Colors of Betrayal. Particularly for Princess Kaiya, in the sense that she was never fully face-to-face with any of the politics or cusps of war quite like she is in this book. For the most part readers would watch as those around her manipulated/schemed and used her as a chess piece for their own means, starting with Avarax (aka Prince Hardeep and aka Rumiya), Peng Kai-Long (also her cousin) or Minister Hong Jianbin (the list could go on.)

Although she doesn’t have full control over her actions and decisions while being caught in the middle of a brimming war between several other neighboring nations, watching Kaiya endure months of downfalls and heart ships following her escape from the Cathyi embassy in Iksuvi and attempt make it safely back home to Cathy was intense.

This book brought a great sense of mortality with it as well the fact that we see Princess Kaiya even have to face being without the gift of her voice on top of being without the security of the Tianzi or Cathy. It is like experiencing the story of what happens to a hero after they’ve done the legendary task they’ve been destined to accomplished. The defeat of Avarax marked an ending as well as a beginning for Kaiya; with new settings, new faces, new creatures, a little less magic and a new enemy, I found it hard to just talk about a handful of them.

Speaking of which, Geros (The first counsel) was and is one of the most memorable, cruel and loathsome villains/antagonists I think I’ve ever come across. Which was another reason I found this book to be so fantastic; I found Geros’ character to be even more threatening and intimidating than Avarax. Geros’ character is consistently present throughout the book, but Avarax was mainly this looming myth whose existence couldn’t be fully proven or denied.

However, it wasn’t all gloomy. There were small bits of humor and a really nice build up to Kaiya and Tian reconnecting in this book. Which I thought was great; we finally got to see Tian again and his tough, Moquan warrior persona but through Princess Kaiya’s eyes. She herself has since shed the shy, timid and innocent shell she once had when they were children and since discovering her voice. So, the reader gets to watch Tian and Kaiya’s story begin again in this book as well.

Also with the slow progression of their relationship, the reader gets to see a slow strain in Jie and Tian’s. At one point a question of loyalty and even bouts of jealousy.  And it was great that we finally get to learn more about the mystery behind Jie’s past and her parents while also getting the chance to see her character in a more independent/solidarity role apart from both Tian and Princess Kaiya.

By the time I got to the end of the book I was happy to see the true leader role that Kaiya eventually ends up taking by the end of the book–despite the circumstances. I’m eager to see how she moves forward with the neighboring territories fighting around her and the deep seeded corruption rooting away at her home land Cathy from within. If you love histotical fiction stories, and high fantasy novels, you will definitely love True Colors of Betrayal and the entire Legends of Tivara, Daughter of The Dragon Throne series.

Thanks so much for reading ^__^
Until the next post,
Gia.