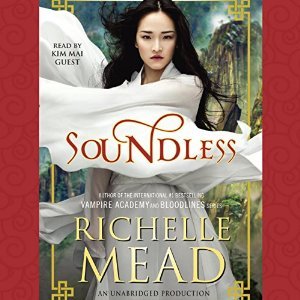 For as long as Fei can remember, there has been no sound in her village, where rocky terrain and frequent avalanches prevent residents from self-sustaining. Fei and her people are at the mercy of a zipline that carries food up the treacherous cliffs from Beiguo, a mysterious faraway kingdom.

When villagers begin to lose their sight, deliveries from the zipline shrink and many go hungry. Fei’s home, the people she loves, and her entire existence is plunged into crisis, under threat of darkness and starvation.

But soon Fei is awoken in the night by a searing noise, and sound becomes her weapon.

Richelle Mead takes readers on a triumphant journey from the peak of Fei’s jagged mountain village to the valley of Beiguo, where a startling truth and an unlikely romance will change her life forever….

Have you ever had a book that you didn’t like but was never really sure about what to say about it because nothing ever actually happened? I mean, that in itself is justification as to why you disliked it, sure, but I guess what really bothered me about Soundless was the fact that there was a promise of this grand story and big secret reveal.

Where as in reality, the story’s entire foundation was made up of the same generic structure of a dystopian world—for Fei and her people at least on the mountain who we discover were actually just being kept from culturally, socially and economically advancing up on their mountain away from the rest of the world.

I gave this book 2 stars for the fact that I was occasionally entertained and interested in the narrative thanks to the enthusiasm and captivating performance by the narrator, Kim Mai Guest, who made this book (mostly) tolerable. Half way into the book, the only earth shattering even that occurred was when Fei suddenly got her hearing back.

And while I appreciated her love and devotion to her older sister, I could not get over the sickening obsession with her once-almost-boyfriend, Li Wei.

Another thing I could not really understand was why her people only had miners, artists, and beggars. Were some of them moonlighting as doctors or something? How had Mai’s people sustained themselves for so long up on their barren mountain?

Additionally to the lack of proper world building, there isn’t any thing significantly unique or specific to Asian culture in this book besides the character names. And to be honest, if the lovely Kim Mai Guest was not narrating this book, I do not thing any listener would/or could tell the difference in the story’s core narrative structure from that of a modern westernized YA fiction to a semi-ancient dynasty based Asian YA fiction.

And to me that is most dis heartening; I mean can this book not be seen as a work of cultural appropriation due to its lack of understanding, rather a proper contextual understanding of Asian traditions history and actual cultural context in this world? It’s like the book was placed in a paper bag cover with “Asian Contents” written on top of it to grab people’s attention, but when you open it up you realize it’s nothing but a bag of empty lies.

I really loved reading proper culturally infused narratives and this is just one of three books I’ve recently went through that sparked my decision to cut back on certain books for the rest of the year, sadly. Bottom line, I need to do a massive search from here on out for better reading material. Disappointing rant is now over.

Thanks for reading, guys.