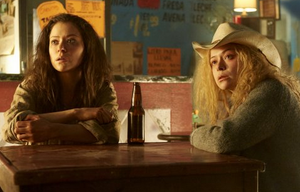 I will say that I really loved seeing how much Allison truly cares about Donnie in this episode. Allison is wound tightly, so it is always nice to see how she acts in situations because if pushed enough, she opens up about what she is thinking/feeling. However, finally getting to see Allison’s mother, it is no wonder she is the way that she is.

Putting into words my impression of Allison’s mother, I would go with: Passive, trite, control freak, entitled, and snide.

Allison + Donnie visit her mother and try to have the Bubbles contract signed.

Openly picking away at Donnie and Allison’s decision to marry a man who took her name (even though it was her mother who insisted he did), and not believing in Allison’s ability to win the School Trustee position, as evident by a Marci Coats poster hanging in her store. What was interesting to learn was that Allison’s mother apparently has a history of “faking heart attacks,” which ended up pulling Allison from the candidate mixer not  five minutes after  Allison arrived.

Could I see a bit of Allison’s character in her mother? Yes, but Allison and her mother have really different personalities and although Ali can act a bit self-involved, her willingness to engage with others and to open herself up to change makes them extremely different. It is overtly clear with Allison’s campaign speech, which is number one on my top three episode moments list.

As Jason and Donnie head to the drug meet with Pouchie, I was preparing myself for a very awkward scene between the three in which Donnie tried his hardest to act cool and tough, but would ultimately need to be rescued or stopped by Jason. I am happy to say I was pleasantly surprised by his surprising and convincing take-charge attitude and his excellent Spanish speaking skills.

Although, due to the sadly predictable plot twist of the envelope switch, I liked how Donnie was able to keep his cool, even until the very last second when his face was lying flat on Pouchie’s desk.

Regardless of what Allison’s mother says or thinks, Allison has a true keeper on her hands with Donnie. 😉

Set on evading having to give Delphine the pee sample that she asked for, Cosima turns to Allison for a pee sample and winds up arriving at the candidate mixer. In true Orphan Black fashion, she is mistaken for Allison and the fun begins. Felix, who is Allison’s campaign manager, dresses Cosima up into a just barely passable version of Allison for a photo-op with her supporters and even to step in for Allison during the candidate speeches due to Allison’s meet-up with  Pouchie’s niece to hand in the right envelope with the drug money.

My top 2nd moment from this episode was Allison’s refusal to give Cosima her pee sample and instead making Cosima realize the importance of the Dyad test especially with her recent illness issues. Cosima has gone through a lot recently and it has caused her to be quite stubborn and recluse, so it was nice to see Allison talk some sense into her.

After Sarah disappears to wash up, Helena and Ms. S have a heart-to-heart, (sort of) in the Mexican bar/cantina that abruptly transitions from a calm conversation to several loose punches—mostly from Helena, until Ms. S’s cool slips after Helena’s third punch. Lashing back at Helena, Ms. S immediately regrets her actions and pulls Helena into a hug.

This moment is my top 3rd moment from this episode, because of Ms. S’s unwavering determination to set things right with Helena. Helena is not one to easily forgive, trust, or persuade to change her opinion or mind about people or things she was not raised to believe. The only other person who has been able to get through to her until now has been Sarah and this scene between them felt like a final wall/barrier that would bring Helena truly into the sister/clone club.

Ms. S stayed so calm and firm when she addresses Helena and you could see with that hug that she was sincerely sorry and wanted to connect with Helena. She has her faults, but I admire Ms. S and her strong motherly, caring and protective ways. Let us not forget that she just took in Gracie, not two weeks ago. Sarah, Felix, Kira (and now Helena) have been extremely lucky to have had her raise them. Wish I could say the same about poor Allison and her Mother.

SCOTT + RACHEL (aka The Odd Couple)

It was beyond entertaining to see Scott and Rachel interact in this episode as she is brought in for her scheduled round of test and notices Scott has one of her paintings. Scott shows Rachel that he has her father’s book and ever the clever cookie, Rachel initiates that she would like to learn how to play a boring board game so she does not raise suspicions with Delphine.

Even though Rachel coyly told Scott that she would only reveal what she discovered from a scanned copy of the book to Sarah, I still have high hopes that our dear golden-child will find her way into the clone club one day (hopefully soon).

Moreover, obviously with Rachel’s ability to decipher the book I have a feeling we are going to learn a few interesting things before this season’s end, but not related to the answers that we are expecting—duh.

Episode rating: 8/10. I thought it was good to switch gears in this week’s episode and that it was an Allison centered week. This season has kind of kept the Hendricks on the sidelines a bit and it is always fun to learn more about a character’s past.

Although the memory of last week’s loss, Paul, is still fresh in all of the Clone Club members’ minds, it helped a little bit that we did not see too much of Sarah because I kind of have the feeling that it would have activated the still raw emotions associated with Paul.

This episode held my attention and exceeded my expectations, as I mentioned earlier with Donnie and how he handled himself with Pouchie and the way Allison not only stood up to her overbearing and insufferable mother, but also the way she handled her campaign speech. She is a true mother hen ^__^

It was also nice not to see any Castor Clones in this episode either—no offense to Ari Miller who is fantastic—it was just nice to have a break from them for once. Another thought that struck me though was that Dr. Coady may end up being the person the Leda clones will have to turn to in order to find real answers to their illness as she seems to be the strongest contender (currently) with any leads to discovering a cure, but only time will tell, Clone Club, only time will tell. Just three more episodes left until the season 3 final of Orphan Black and I am pumped to see where the rest of the season goes, are you?