*note: cover image may no be visible to all depending on device.

After a rocky freshman year that included outstanding production on the field, unsatisfactory performances in the classroom, an unforgettable breakup and a suspension from the biggest game in school history – Michael “Tootie” Mayberry is ready to demonstrate growth and maturity in his upcoming college sophomore year.

However, while Tootie aims to improve upon a stellar season that made him a freshman All-American. He first has to rebuild a reputation that took massive blows stemming from a cheating scandal that landed him on academic probation. With his future of becoming a professional athlete hanging in the balance, how will Tootie respond to the increasing demands of being a student-athlete?

Much like my impression of book one in this series, Athlete Student: Freshman Year two years ago, this book was a quick and easy read. And after going over my notes for book one, it left the lingering idea in my mind that these books are meant for a much younger audience than I initially remember.

Once that seed was planted it altered my take on the book and the series. With a more critical eye than before, as I tend to think of young readers like my cousin, turning the pages of this book. The thing that strikes me the most about the author’s concept is the level of insight and approach to tell a story like Tootie’s that I am sure mirrors many who grew up in similar situations like his and who live, breathe and sleep all things football just to fall victim to pressure or into a mistake that puts their (his) entire sports career, future, and life in jeopardy.

Then, having to come back to face those obstacles all over again, but have less faith in yourself or from others than they (he) did before. There are a lot of things that make me admire Tootie’s character in that sense, with his self-centered tendencies and impulsive behavior. With the book being as short as it is and not set up by establishing all the characters as book one did, it leaves me little room to discuss much without revealing key elements of the plot.

However, as Tootie heads back to school to get his head and mind back into the game, sort-of-speak while regaining the trust of his team, the school and those watching him from afar in Sophomore Year the readers get to see a more serious and focused side to his character as he takes his academics more serious than he did in book one.

Unaware of the tension and a bit of trouble developing back home with his father and his older brother, Tootie’s bond with his teammate and roommate, Marcus, grows as he finds himself pursuing a new romantic relationship with a smart and pretty girl at school, Brianna whom he comes to realize offers Tootie a more mature and stable support than his first love and girlfriend, Sophia ever did in book one.

With that being said, I did not entirely feel the intended audience for the book matched with all the details and content we are exposed to in book two. A lot of the things we see Tootie face in his personal life as well as with his close friend Marcus, read as if it would be more suited to a slightly older audience rather than a middle school one.

Likewise, although there are several messages that the author delivers within this book on perception, a bit of pride, mental health and fighting to find that balance between school, sports, and home that I find a younger audience should have in the stories that they read.

The methods in which they were brought not only felt inorganic, and at times uncharacteristic for Tootie himself to call attention to these details. They also seemed like material much better suited for a YA book for high schools. Especially the conversations Tootie eventually has with a school psychiatrist, issues Marcus’s character faces in his own life and where we leave Tootie’s character at the very end of the book. 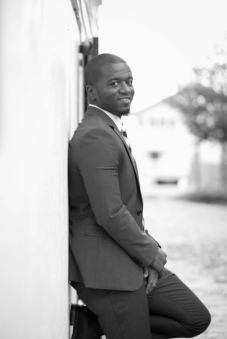 Eugene D. Holloman is a former 2x all-conference running back at James Madison University. Growing up he had aspirations of playing professional football after college, but after two significant knee surgeries before his senior year, his plans were derailed. After graduating with a degree and pursuing a major simple enough to keep him eligible but that honestly disinterested him, Eugene quickly regretted not taking school more seriously. While some of his college buddies were off to corporate careers or entrepreneurship, Eugene spent the next four years in his parents’ home discovering his passions and what career path he wanted to pursue. Eugene enrolled in a master’s program to pursue his MBA while working as an elementary school tutor and sales rep for a high-end suit retailer. While not making enough money to pay for school, he eventually landed an entry-level job at a fortune 500 healthcare company. Soon thereafter, he applied and was hired to the company’s leadership development program.

Eugene is now a corporate compliance manager for the same company and is currently pursuing his doctoral degree at Regent University. He credits Regent University for helping him discover his passion for writing within just his first couple of semesters of attendance. While writing numerous research papers on leadership, Eugene decided to write his first fictional novel “The Athlete Student: Freshman Year.” His goal is to reach as many student-athletes and youth as possible in hopes that this story will benefit them, as Eugene believes having such an inspiring read would have been highly impactful when he was in high school. Visit www.theathletestudent.com for more information.

Would I recommend this book to others to read? Yes, I would but to a little bit of an older audience.

As this ARC does not have a release date yet, I will be sure to keep you all posted on its release date as well as if there will be any promotional events happening for its launch ^__^.

Thank you so much for checking out my post for The Athlete Student: Sophomore Year.