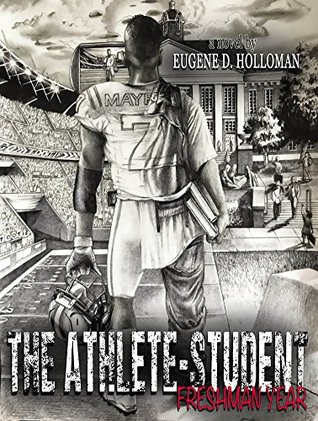 Title:The Athlete Student: Freshman Year
Author: Eugene Holloman
Genre: Sports, Student-life, Fiction
Rating: 3.5
Release Date: February 1st 2018
Goodreads | Amazon |
Synopsis:
High school senior Michael “Tootie” Mayberry has a dream of becoming a professional football player—but he faces one obstacle, COLLEGE.  Over 480,000 student-athletes like Michael “Tootie” Mayberry want to play professionally, but less than 3.5% will. They train hard, planting and watering the mental seed that tells them they will reach the pinnacle of their sport. In the process, they often pick the easiest major available, and after graduation, they pay for it.

HOW DO STUDENT-ATHLETES GET TO THIS POINT?

Join “Tootie” Mayberry as he embarks on his college career, balances the stresses of high-level performances on the field and in the classroom, and fights through other challenges student-athletes face.

My first impression of this book was that it read like a novella because it was not an extremely long story and that it was passable for as an upper-middle school appropriate book for the most part. However, the author was able to touch on a lot of different scenarios as to how life as an athlete in school can be a huge challenge and a bit of a burden.

Such as the pressure to be good, to stand out, to stick to your guns and your passion; on top of the pressure from the media can affect you when aspects of your life start to unravel. With all that being said, I would have liked it if there were better pacing and resting periods in between each issue/obstacle that Tootie faced in this story. The reason for that is because it began to feel like everything was happening all at once the closer I got to the end and it made processing it all (and Tootie’s reactions) a bit difficult.

I think I should also mention that I am NOT a sports person by any means. Which is why I really liked the insight this book gave me about the high school to college football experience; from picking the perfect school or what might feel like the perfect school possibly feels like for athletes. As well as just how much they are pushed, both physically and mentally, in school with having such a rigorous schedule separate from the academic side of college.

Just from my personal experience, I knew and felt the pressure of the projects, test, papers, and studying. So, this book was really an eye-opener. It was also great to see the way Tootie’s s character instantly knew what college was right for him based on his personal aspirations for the future contrasted to the different ideas and expectations from nearly everyone else in his life perceived for the future. Tootie seemed to see those options as “safe” and “basic” schools, which I could really respect because he had something to prove, but at the same time, it gives Tootie a tough and maturing life lesson to learn and experience all on his own.

Behind the scenes, all the support he got from his hometown, his dad, brother, and girlfriend was just incredible. I really felt for the situation his brother Shawn went through and how their mother’s death shifted basically shifted everything for the two of them growing up. I could also understand the strain it seemed to leave on their father in this book as well. And although it may not have been directly connected or intentional, I  looked at Tootie’s success in football was a result of his older brother keeping him off the wrong path and sacrificing himself to the streets.

Without question, the one who was the hardest on Tootie throughout the entire book was Tootie himself.  All the coaches from the new school and the tough love he got from his father did not come close to the amount of pressure and internal doubt that Tootie put on himself. Fluctuating back and forth obsessing over his skill, the potential for growth and talent as a good player–it is fair to say I have gained a greater appreciation for those in the athlete world.

The book ends on a kind of cliffhanger following a big mistake Tootie’s makes at the end of his first semester and it made interested to see what will happen to him in the future.

I am also so thrilled to spread the word about Eugene offering two, $250 scholarships to student-athletes in the Hampton Roads, Virginia-metro area and one $300 scholarship nationwide. The deadline to apply is August 31, 2018, and recipients will be announced on September 5, 2018.

Eugene D. Holloman is a former 2x all-conference running back at James Madison University. Growing up he had aspirations of playing professional football after college, but after two significant knee surgeries before his senior year, his plans were derailed. After graduating with a degree and pursuing a major simple enough to keep him eligible but that honestly disinterested him, Eugene quickly regretted not taking school more seriously. While some of his college buddies were off to corporate careers or entrepreneurship, Eugene spent the next four years in his parents’ home discovering his passions and what career path he wanted to pursue. Eugene enrolled in a master’s program to pursue his MBA while working as an elementary school tutor and sales rep for a high-end suit retailer. While not making enough money to pay for school, he eventually landed an entry-level job at a fortune 500 healthcare company. Soon thereafter, he applied and was hired to the company’s leadership development program.

Eugene is now a corporate compliance manager for the same company and is currently pursuing his doctoral degree at Regent University. He credits Regent University for helping him discover his passion for writing within just his first couple of semesters of attendance. While writing numerous research papers on leadership, Eugene decided to write his first fictional novel “The Athlete Student: Freshman Year.” His goal is to reach as many student-athletes and youth as possible in hopes that this story will benefit them, as Eugene believes having such an inspiring read would have been highly impactful when he was in high school. Visit www.theathletestudent.com for more information.

Thank you so much for checking out my post for The Athlete Student: Freshman Year. Be sure to check out the book yourself AND  the author’s scholarship if you’re applicable ^_^.