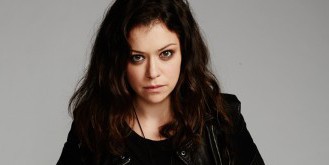 In this week’s Orphan Black episode, “Scarred By Many Past Frustrations” written by Alex Levine we unexpectedly saw the roles reverse for Helena and Sarah after Sarah awakens in the Castor clones’ military camp in a cell next to her sister/twin clone, Helena (whom showed her no love upon seeing Sarah).

Helena revels in seeing Sarah trying to adjust to the all too familiar confinement conditions that she grew up in. In true bickering siblings form, Sarah pretends that she isn’t hurt by Helena’s rejection and tells her that she hopes she rots in her cell. Ever the sharp knife in the display case Helena replies with, what I think is the best quote in the episode: 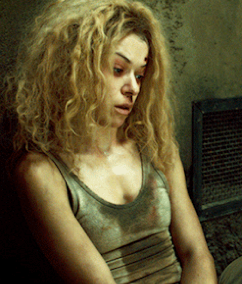 “In the convent, I survived in a broom closet for four months. I do not rot.” –Helena

Although seeing Helena and Sarah interact with one another is always great, I am sad that my prediction about Helena rejecting Sarah was so spot on. Our #cloneclub sisters have to stick together against these Castor punks. Falling apart at the seams will not help up win this clone war, am I right?

Meanwhile, a rejected and alone Gracie finds her way to Art’s front door who takes her to stay with Ms. S despite Felix’s protest, Ms. S tries to make Gracie feel at home. As the baby clone bones  (believed to hold the key to saving the Castor clones lives) are examined, ‘Mother’ sends Rudy off to ‘have fun’ so that he and the Major, aka Paul do not clash when he arrives and discovers Rudy and Mark have brought Sarah to the camp.

“All you had to do was stay away.” -Paul to Sarah when he sees her in her cell.

When Paul does return to the camp he is more than pissed to see Sarah there, which is understandable considering the lengths he went through to make sure Sarah was able to escape Dyad and be with Kira.  Even under the circumstances, Paul continues on to defend his actions and alignment with the Castor brothers because he, like Sarah, is only trying to help and protect her “genetic siblings” who too are sick and dying. The only upside to their interaction was that Helena is that she heard Paul admit that he traded Helena for Sarah.

As Mark awakes from having his wounds tended to, his ‘Mother’ questions him about his wedding ring and his involvement with Gracie. Mark informs her that he “did what he needed to in order to complete the mission,” though we know at this point that Mark sincerely loves Gracie. ‘Mother’ accepts Mark’s explanation, but takes his wedding ring telling him that their relationship “wasn’t real” as Gracie is not “one of them.”

Mark’s “Mother” hands him his first ‘intimate contacts’ journal to ‘log’ his interaction with Gracie within it. Talk about depersonalization and dehumanization. I mean, to log his wife and his first time together as nothing more than the first page of an ‘intimate contact’ journal—geez. These two lovebirds have a lot of hurdles ahead of them. For someone trying so desperately to save her ‘children’ Dr. Coady is quick to cast them aside if any of them cross or disappoint her.

Over at Ms. S’s place, a naïve and sheltered Gracie attempts to make up for lost time (and put Mark behind her) as she slips into one of Sarah’s very tight and revealing outfits for a night out on the town. Stopped and persuaded to spend the night in with Felix and Ms. S, the three turn on some music and have a very exclusive house party. That is until Gracie unexpectedly collapses in pain.

Back at the Castor camp, Helena and Sarah come up with a plan to escape from their cells, but it unfortunately involves Sarah taking a beating from a guard and her Castor clone-brother, Miller to do it. Once sent to the medical office to get patched up, Sarah successfully nips a pair of tweezers that Helena uses to get out of her restraints. Using the barred restraint as leverage to pull out a loose bar from her cell door Helena slides through the small opening with the aide of butter packets she so cleverly stashed away from her food trays.

Our clone club this week featured mainly Helena and Sarah, with a guest appearance by the lovely Cosima as we got to see her venture into online dating where she met a beautiful, seemingly harmless Shay. An understanding and experienced online dater, Shay gets Cosima to open up about how the breakup with Delphine has been affecting her and the two share a kiss.

If only we could end the episode on such a high and sweet note. Unfortunately when we see our sister-clone team again executing their escape plan, a free Helena decides to leave Sarah in her cell.

“Now we’re even.”-Helena says as she leaves Sarah in her cell.

Elsewhere, a doubtful and questioning Paul visits the room Parsons was kept in to examine his body. Looking through Parsons’ belongings, Paul seemed surprised when he came across his intimacy contact journal.

Still trying to figure out what has happened to Sarah, Art tracks down Patty (the woman cornered by Rudy and Seth in episode two) to ask her more question about her time with Rudy and Seth when he discovers since her encounter with the Castor bothers that she has been sick. A visible sign of infection evident by her blood shot eyes.

As a paramedic examines a barely conscious Gracie, we learn that she too is suffering from the same ailment.

I feel as if my reviews are getting a bit shorter when it comes to recapping the episodes, but I don’t think it can be helped. I just can’t wait to get to the “Overall Thoughts” section. This episode was incredibly nail biting and heart pounding.

My mind is still reeling from Helena’s decision to leave Sarah in the camp. That moment broke my heart because even though Helena knew the truth about how she ended up there, she still blamed Sarah for it. Sarah—the sister who was risking her own life to find her and bring her home. It was just so—ugh! My heart broke a little bit for these two who are constantly struggling to be on the same page.

Helena even hesitated before she left the camp that makes me think that she might try to come back for her. If there was anyone gutsy enough to do it, it’s Helena.

“My sisstra. She tears my heart.” – Helena to her talking scorpion.

My only fear is that because of Helena’s abandonment, Sarah will turn her back on her sister again. Also, I am still hoping that once he recovers, Mark will try to help Sarah escape and leave with her so that he can be with Gracie, but I have a bad feeling that with the discovery of his marriage, ‘Mother’ will have Mark under an extremely close watch.

After learning Gracie and Patty are both sick after being with a Castor clone, it made me think that with the Castor’s deteriorating DNA, not only does it affect them internally but those they come in contact with intimately. Therefore, the true importance of those journals must be to track where they’ve been and who they’ve been with as a possible outbreak control protocol. I’m not sure what the ailment could lead to, but I fear that like the Castor brothers’ health, it is fatal.

Episode rating: 8.5/10 for all of the intensity and the scenes between Sarah and Helena. I even enjoyed watching the cute scenes with Cosima on her date.  Although I like that Shay got Cosima to open up and relax, I do not trust her. During their blind date, someone was taking photos of the two of them and who knows perhaps that someone is spying on Shay for a completely Non- LEDA related reason, but I’m not going to put all of my eggs into that basket.

My final thought on this episode, with the exception of Mark I am really over the misogynistic tendencies these Castor clones are showing towards all the female characters, with the exception of their ‘Mother’. People have been killed; we’ve seen a man with his brain exposed and a guy was impaled onto a metal rod sticking out of a wall tonight.

We have even watched as a clone was dissected, but the most sickening thing to watch for me thus far is how the Castor punks act towards the opposite sex. A big part of me hopes that Helena comes back to the camp and wreaks havoc on them all, but I know that is probably just wishful thinking.  Ah, well. ^___^

Until next week, Clone Club,