In last week’s episode, we witnessed Mark being gunned down by Mrs. Johanssen (Bonnie) in the cornfield of the deceased William Finch’s farm as a terrified Sarah watched from the barn. This week’s episode, “Newer Elements of Our Defense,” written by: Russ Cochrane, opened with Bonnie emerging from the field like a huntress sensing another big kill near by as she stalked her way over to the barn.

Sarah makes her way out of the barn and takes cover beside Mark’s truck; she finds Mark’s discarded handgun on the ground and slips into the cornfield. Sarah does not get far in when she comes across a badly wounded, but still very much alive Mark. 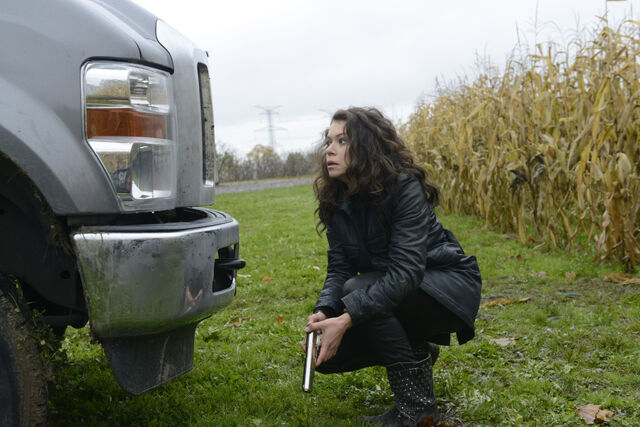 She manages to get Mark to an abandoned house a few miles away from Finch’s farm where she helps him remove a bullet stuck in his leg once the two come to a natural truce—in terms of Mark answering Sarah’s questions in exchange for her help. It is not long, though before the loss of blood causes Mark to pass out and with the discovery of his hotel key, Sarah calls an ambulance for Mark and leaves.

Whilst Bonnie has taken Gracie to their new Prolethean home run by Mr. Appleyard where she and the rest from her ‘fleet’, (perhaps the better term is flock) have taken up residence after the fire at their home. Mr. Appleyard examines Gracie and seems to sense something is off either with Gracie or the baby she is carrying. I should mention that Mr. Appleyard is blind, so perhaps he has heightened senses (I am not a hundred percent on this). Later that day, however, Gracie looses the baby. Convinced that the miscarriage was punishment for Gracie running away with Mark, her mother (Bonnie) shuns Gracie and banishes her.

Else where, Helena cleverly plans to out smart her captors by stashing (what looks like a pork chop) bone away and staging an outburst to be taken from her cell in an attempt to plan her escape, (with her trusted talking scorpion) only to discover Dr. Coady doing tests on one of her own Castor clones, Parsons. This affects Helena’s actions later when she chews up the bone into a makeshift key and gets out of her cell, but more on that a little later.

Meanwhile, Mother Alison and Donnie attempt to close up shop, or at least put a pin in their operation until they can figure out if they are being watched by the cops when it turns out the true owner of the pharmaceuticals they bought from Ramon wants answers from them. As luck would have it, Alison and Donnie are summoned to meet with drug boss, Jason Kellerman whom turns out to be an ex-boyfriend of Alison’s’. Impressed with Alison’s homemade-soap cover for selling the drugs, Jason agrees to let Alison and Donnie continue their operation.

While out with Felix, Cosima gets a call from Sarah who has made her way to Mark and Gracie’s hotel room and found the box Finch was holding for Johanssen. The documents in the box reveal that Johanssen worked as one of Duncan’s lab assistants on project Leda and had access to the original Castor samples. Moreover, he used the samples and tried to make more clones (but at this point, should we really be surprised? He seemed to have this super god complex), but only one was successfully created and hosted by Bonnie Johanssen. When Mark shows up at the hotel, upset that Sarah left him after he passed out, she explains that Johanssen used the original samples they’ve been looking for to create a son. Aware that the boy was born, but did not survive, Mark takes Sarah to the infant’s grave to dig up the bones. Unaware that Rudy followed the two, he appears to take the samples and kill Sarah.

Mark is able to stop his demented, younger brother from killing Sarah, but at Rudy’s comment about not leaving loose ends, the episode ends as Mark moves in on Sarah.

This week’s review is a bit different than the previous ones because there were key parts in this episode that I feel are worth picking apart and intensely focusing on, where as others felt like mini-plot hooks for the rest of the season later on. For now, the main points I will try to focus on are Helena, Mark with Sarah and the original tissues samples.

“Newer Elements of Our Defense,” let us glance into the purity and empathetic side of Helena as she did what she is best at—surviving. She does not see the world the same way others do and for that she is looked down a pond as being stupid, strange, gullible and easily manipulated. However, Helena’s intelligence actually supersedes those around her because she is observant, patient, and often fearless. From point of view, I interpret that the fearlessness comes from Helena’s harsh filled and ridged false connections upbringing, but she understands what true pain is.

The mercy killing between Helena and the Castor clone, Parsons was heartbreaking to watch because you could see how much pain he was in and how sorry she felt for him. 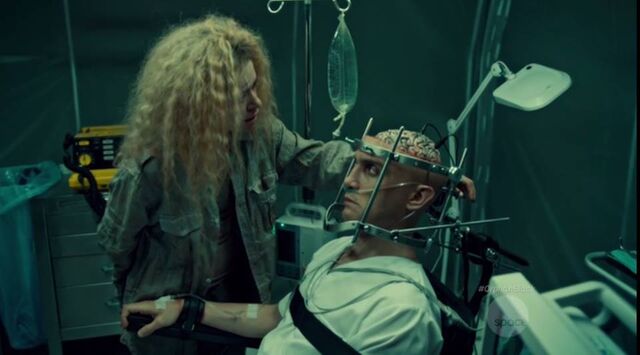 Helena talks to Parsons after her escape (Photo from Orphan Black’s wiki page). “We’ve both been abandoned by our families.” – Helena

I did not see this as an act of cruelty, but one of kindness on Helena’s part. Yes, the show is based off of the concept of clones, but they are people. Regardless of how they came into the world, they do not deserve to be used like test subjects. This week’s episode also answered a few questions, or rather connected a few dots that were set-up in the beginning of the season, however from next week’s preview, I question the direction the rest of the season is going to take.

I have replayed a few scenarios in my head regarding Dr. Coady and the Castor clones, for instance, since they have both Sarah and Helena, will they decide to kill one of them? Will the conscious flicker we saw in Mark resurface and he’ll attempt to help them escape? Will Mark tell Dr. Coady that Sarah told him that the Leda and Castor clones siblings?

I felt that Mark was his true self with Gracie and Sarah and he honestly seems like the type who could truly walk away from his life in the military and from ‘Mother’ if given the chance. Likewise, I am hoping that we get to see him interact with Sarah a bit more; the two had a few bonding moments in this episode and it made me consider having Mark as part of the clone club for like a second—let’s see what happens next week, though.

To what length will Paul go to make sure Sarah gets out? I know about that line of loyalty and morality that he struggles with when it comes to the Leda clones and the military, and I know that he often wavers when it comes to Sarah. Will Helena realize that Dr. Coady, Miller and Rudy have been lying to her about Sarah willingly giving her up? Or will we see her pull away from Sarah? Who is this new girl entering Cosima’s life? Can she be another monitor?

The whole baby Castor clone situation with Johanssen left me wondering if Gracie’s miscarriage had something to do with her and Mark being together since the baby was part Leda, and Leda and Castor are technically siblings…on second thought, I’m not going to go down that rabbit hole.

Episode rating: 8.5/10 because the only moments my heart was not racing during this episode was when Alison and Donnie went to their ‘drug deal’. I mean the concept of these two as drug dealers is still hilarious and they were dressed in such plain winter attire, attempting to look unafraid.

Putting into context all of the other things happening in this week’s episode, it was just so hard to take seriously and it added a lightness to the plotline. I also found myself being happy that Mark didn’t die last week (despite my previous comment) because he seems like the nicest and most compassionate one of all the Castor clones we’ve seen so far. Next week’s episode seems like a can’t miss, so do not miss it, people :-).

So, until next week’s episode,