So I just happened to stubble across this card advertising a Comic Con on Long Island, the ETERNAL CON, this Saturday June 15th from 10am to 6pm 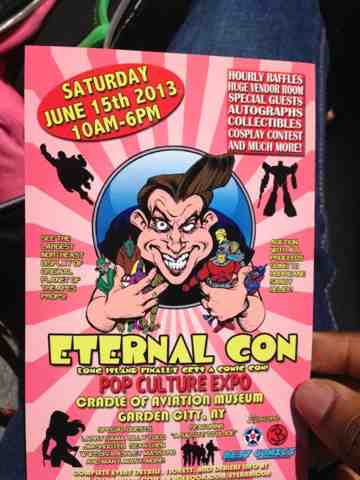 At the Cradle Of Aviation Museum in Garden City and by the looks of it, it’ll be a really good one. In appearance will be former editor and chief of Marvel Jim Shooter (wonder how much information he can provide to fans of Marvel since Disney’s purchase of Marvel Entertainment in 2009). Also named to be in attendance is Sean Chen and Larry Hama among others. Chen, who was the artist behind Iron Man and Wolverine, and Hama, who was a writer for G. I. Joe and Wolverine. 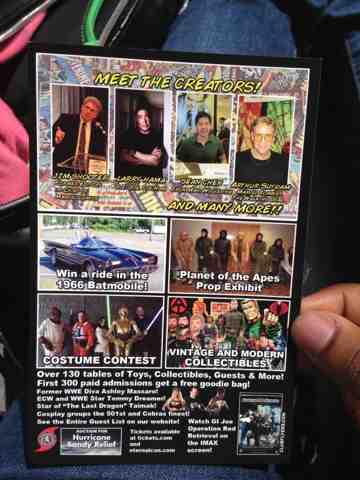 There will be some really cool stuff for those who but tickets for this like gift bags for the first 300 guest who arrive, vintage and modern collectibles, a Planet of the Apes Prop Exhibit, hourly raffles, a Cosplay Contest(of course) along with what sounds like other cosplay groups and a chance to win a ride in the 1966 Batmobile!
I am seriously feeling out about this!! I have never been able to actually attend a comic con and then this one appears. No practically lands in my lap and I’ll be out of town when it happens. My life is just like some sort of joke sometimes I mean really. But a last I thought I’d pass on the news to anyone else who’d like to attend.
Did I mention that there will be an auction held at the comic con will all of the proceeds going to the Hurricane Sandy Relief which is awesome. Months later there are still a lot of people who need help. I highly recommend checking out their website for more details and to confirm and deets I got from the ad and to fine out more info.
P.S.: The flyer says tickets can be bought at: tickets.com or at eternalcon.com