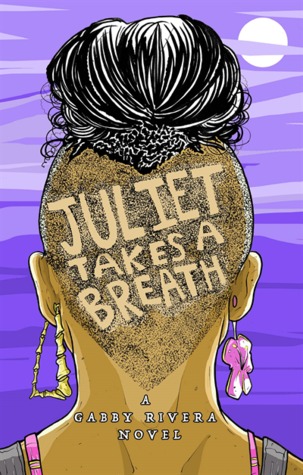 All of the women in my life were telling me the same thing. My story, my truth, my life, my voice, all of that had to be protected and put out into the world by me. No one else. No one could take that from me. I had to let go of my fear. I didn’t know what I was afraid of. I wondered if I’d ever speak my truth.” – Juliet Takes a Breath.

Juliet Milagros Palante is leaving the Bronx and headed to Portland, Oregon. She just came out to her family and isn’t sure if her mom will ever speak to her again. But Juliet has a plan, sort of, one that’s going to help her figure out this whole “Puerto Rican lesbian” thing. She’s interning with the author of her favorite book: Harlowe Brisbane, the ultimate authority on feminism, women’s bodies, and other gay-sounding stuff.

Will Juliet be able to figure out her life over the course of one magical summer? Is that even possible? Or is she running away from all the problems that seem too big to handle? With more questions than answers, Juliet takes on Portland, Harlowe, and most importantly, herself.

I think the problem I had with writing this review was the fact that there was so much I wanted to say, so much that this book says, so many people out there in the world who I think needs to read and those who have simply ached for a book like this. If I could quote this entire book in this review right now, I would. As Raging Flower was to Juliet’s character, Juliet Takes A Breath will be to me.