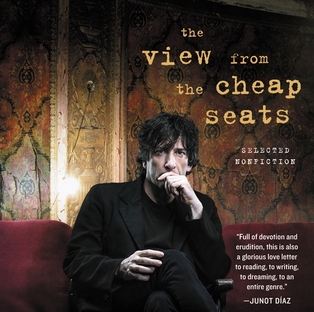 An enthralling collection of nonfiction essays on a myriad of topics—from art and artists to dreams, myths, and memories—observed in #1 New York Times bestselling author Neil Gaiman’s probing, amusing, and distinctive style.

An inquisitive observer, thoughtful commentator, and assiduous craftsman, Neil Gaiman has long been celebrated for the sharp intellect and startling imagination that informs his bestselling fiction. Now, The View from the Cheap Seats brings together for the first time ever more than sixty pieces of his outstanding nonfiction. Analytical yet playful, erudite yet accessible, this cornucopia explores a broad range of interests and topics, including (but not limited to): authors past and present; music; storytelling; comics; bookshops; travel; fairy tales; America; inspiration; libraries; ghosts; and the title piece, at turns touching and self-deprecating, which recounts the author’s experiences at the 2010 Academy Awards in Hollywood.

Insightful, incisive, witty, and wise, The View from the Cheap Seats explores the issues and subjects that matter most to Neil Gaiman—offering a glimpse into the head and heart of one of the most acclaimed, beloved, and influential artists of our time.

I enjoyed this book because the selections were so vast and progressive. Neil covers topics linked to movies, films, music, books and several other topics that range in a tone of positivity and objectivity, with an imaginative progression, even with the subjects he has less love for than others. I knew going into the book that I would read about pieces of his life and learn more about how he perceives the world, but I can honestly say that what I liked most about reading this book was the way the essays and notations were engaging, light-hearted, funny and engrossing. It was kind of inspiring, at times to read and feel his optimism.

I selected a few articles in this book that I knew I wanted to read and ended up just freely getting caught up in others. For most readers who pick up this book, whether a fan of Gaiman or not, I think this collection will have the same effect. I’d recommend this book for book enthusiast who also likes to get caught up in books that offer layered content without anything complex or overbearing. It’s a good book to have on your shelf to pick up to read at any time and it would make a great road trip book as well.

Neil Gaiman is the New York Times bestselling author of the novels Neverwhere, Stardust, American Gods, Coraline, Anansi Boys, The Graveyard Book, Good Omens (with Terry Pratchett), The Ocean at the End of the Lane, and The Truth Is a Cave in the Black Mountains; the Sandman series of graphic novels; and the story collections Smoke and Mirrors, Fragile Things, and Trigger Warning. He is the winner of numerous literary honors, including the Hugo, Bram Stoker, and World Fantasy awards, and the Newbery and Carnegie Medals. Originally from England, he now lives in the United States. He is Professor in the Arts at Bard College.

Thanks so much for stopping by for this tour. Be sure to continue to watch this space this week 🙂