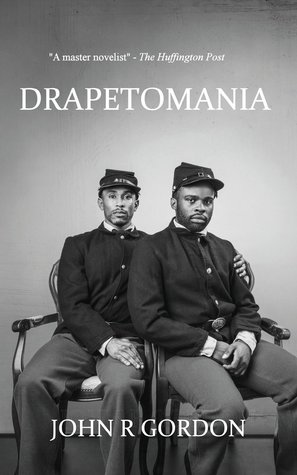 Synopsis: When house-servant Abednego is sold away south, his heartbroken field-hand lover Cyrus snaps and flees the estate on which he has lived his entire life. Leaving everything he knows behind him, evading dogs and patrollers as he heads north, in the midst of a dismal swamp Cyrus receives the revelation that Abednego is his true North Star, and, impossible though it seems, he determines to find and rescue his lost lover from slavery.

Ten years in the writing, Drapetomania, Or The Narrative of Cyrus Tyler & Abednego Tyler, lovers, is an epic tale of black freedom, uprising, and a radical representation of romantic love between black men in slavery times.

A riveting, masterful work. Set against the brutalizing, material captivity meant to break the soul, that came to define the chattel enslavement of Africans in the American south, Drapetomania tells the compelling story of two men whose love for each other reimagines the erotic contours of what was possible under the whip and scrutiny of catastrophic bondage. Here is a story of love so powerful, so achingly present, it dares to consider not just the past but the future, as vital to freedom; and in doing so, defies any notion of the black enslaved body as an ugly, unpalatable thing, unworthy of the sweetness of love. Gordon’s novel enters the company of such classic works as Edward P. Jones’s The Known World, Toni Morrison’s Beloved, and Barry Unsworth’s Sacred Hunger. We will be reading and talking about this extraordinary novel for years to come.

Reading this book was such an experience for me. Each chapter, character action, the accuracy in the details, the pacing; all of it reads like an epic.  I went through several stages of what felt like a symbolic, yet temporal, metamorphosis, both emotionally and consciously, by the lives illustrated by some of the enslaved characters in this book. So, I will try to keep my notes and thoughts on the story linear with this post.

Drapetomania is broken up into three books in this novel and told in a third person perspective that alternates between the lives and experiences of the two main characters, Cyrus and Abednego. Set in the late 19th century, where bristling talk and whispered rumors of a war between the Southern plantations faction of the United States, against the industrializing, forward-thinking North. However, unaware of the truth behind the rumors of a Civil War on the horizon, Cyrus, and Abednego, two enslaved men who live and work on the same plantation, have fallen in love.

I already knew a lot about the horrible treatment, abuse and dehumanizing conditions that enslaved Africans & African-Americans lived in, but to be placed in the middle it while reading this book took a whole other form and meaning.

During my Q&A with John, (the full interview is below) I asked about certain story themes and relative messages that he placed in the narrative. And one of those was the appalling suffering of enslaved African women, which I found one of the toughest aspects of this book I found to get through. Which is why I felt the practically spiritual connection and love between Cyrus and Abednego truly represented not only the light of this book but also the feeling of hope that pulled me through the story.

In book one, we follow Cyrus, a field-hand, as he runs away from the Tyler estate several months after Abednego has been sold away. He sets out for freedom and follows the North Star while being hunted until he realizes that he is running for a sense of freedom that he has only ever felt when with his lover, Abednego. Once Cyrus understands what he is truly missing, his character is driven by that singular desire of feeling whole once more—with Bed.

The journey we watch Cyrus go on to try to track down his lover’s potential whereabouts is anything but easy, clear or hopeful, but his compulsive need to try really resonated with me. I know it will with other readers as well.

And while I felt I was kind of on pins and needles reading this book with the tension engulfing Cyrus’ situation, I enjoyed the emotional connection I gain toward his character’s personal growth from one daring escape—each more intense than the last—to the other of the many hold-your-breath peril moments he encountered.

Cyrus’ shift from relying solely on his physical abilities, to quick thinking and blending in with other enslaved individuals really brought his character to life. In book two, the perspective shifted to Abednego and I love, love, loved that I was able to see Abednego’s point of view first-hand as all the information we have up until this point was from Cyrus’ s point of view.

And while book two depicts his life after Tyler’s estate and several months before Cyrus’s escape, it brought a validation to their relationship, their love for each other and their story all at once. As at the heart of everything that unfolds in Drapetomania, it was a reminder that it is a love story of one heart beating within these two men.